This amateur footage has been montaged with images from surveillance cameras, while press reports and quotes have been inserted. A “story” has been deliberately omitted. The filmmaker thus minimizes commentary; the chronology of the scenes remains authentic. Image and sound material have been layered over each other, broadening the perspective.

The viewer becomes a witness, a participant, a voyeur, an opponent, a projection screen. This film cannot be consumed, it challenges. Those who get involved are thrown back and have to orient themselves in a situation in which subjectivity is canceled out by mass while objectivity also seems impossible.

Sibylle Kappes
Sibylle Kappes
Kappes completed her schooling in 1994 in Winsen Luhe. From 1995 – 1997 she traveled in North and South Africa. From 1999 – 2000 she studied at the Freie Kunstschule Berlin, then worked as a freelancer in the film and television industry. From 2001 – 2003 she did an NLP Master and Coach, also founding the EU-funded, “k-project.” This led to an involvement with socially conscious advertising and installation-like artworks in public spaces. She later completed a BA in German Literature/Philosophy with as well as further courses at the HFS Ernst Busch and KH-Weißensee. In 2018 she was granted funding under the Grenzgänger program from the Robert Bosch Stiftung. Since 2014 she has worked with Arsenal Distribution. She Lives is a filmmaker and lives in Berlin.

Interview with the filmmaker

Sybel, your last film “Forundje – Weißer” shows encounters with children in Ethiopia. “G8ten” now plunges into the turmoil of a mass protest. Do the two films have anything in common?
Both are very close to their environment, there is hardly any distance between the camera and the protagonists. In the filming situations, people were more present than the technology. Normally, a camera team immediately finds itself in a glass bell jar of professionalism, which leads to curiosity, awe or defensiveness in the people around them. This is not the case in these two films. As a result, there are moments of high authenticity. Of course, this is also due to the fact that the filming situation itself is being made a topic.

What subjects interest you as a filmmaker?
I think I’m one of those people who stumble over the subject of power and powerlessness again and again. I wouldn’t say that I’m interested in it as a filmmaker, it’s more that this topic has gripped me personally and won’t let go. I would like to make a romantic comedy for emotional balance.

How did the project “GE8EN” come about?
From my own life, from my own early experiences as a protester. And then from meeting a friend whose life has remained closely linked to the protest movement. For her birthday she organized a video evening with independent material. There were pictures from Genoa that hit me very hard, the violence, all the blood. The (mainstream) media reported on Genoa mainly about the death of the demonstrator Carlo Giuliani. But not about the circumstances before and after. So the images of extreme police brutality were completely new to me. I asked myself, why is this not being reported, what is going on here? From then on, I started researching. It was originally going to be a larger work about the protest movement. GE8EN is what was possible.

Do you see yourself as part of such a movement?
No. At first I thought, yes, of course, I was part of it, I belong to it. But then I understood that such a movement is a very close-knit network of its own. Some people spend their whole lives in it and have developed very special values and manners. Such people tended to perceive me as an intruder. Trust was a very important issue. It is very difficult to maintain trust when the atmosphere is under pressure like it was in the “scene” before the G8 summit. There were many house searches, surveillance and other kinds of repression. Things had already come to a head. The practice of the V-men also leads to an undercurrent of mistrust: Is this stranger infiltrating to obtain information?

In other words, as a person with a camera, you were suspect to begin with?
At least people who do media are scrutinized with particular suspicion because there is so much unqualified and sometimes downright distorted reporting. So it was a difficult situation. On the other hand, of course, there is Indymedia and video activism, independent amateur reporting, which is set against the professional mainstream media. Our team placed itself on the video activism side as much as possible. Still, of course, there was always that niggle.

What role does the media play for a system-critical protest movement?
A very difficult one. On the one hand, they depend on the media as their mouthpiece. It is not really about rioting, but about substantive criticism of unjust and often simply inhumane conditions in the capitalist global system. Activists are committed to ending the suffering of others who do not have the opportunity to do so themselves because they are too poor or uneducated, or because they do not belong to the group of negotiators, like animals and plants, which are granted little or no rights. But they also express their own discomfort with our culture. The problem with the media is that they are part of the system. 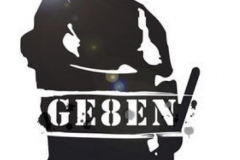 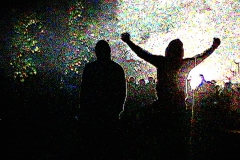 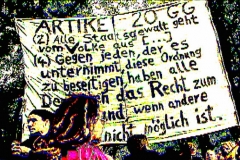 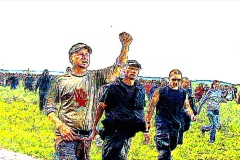 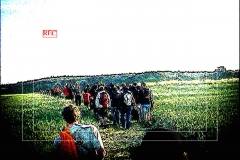 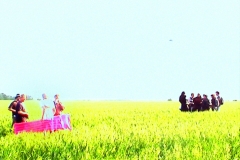 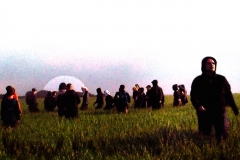 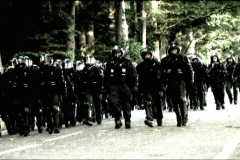 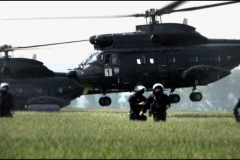 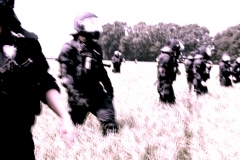 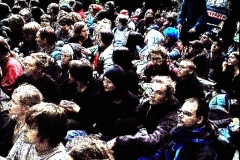 Link to the docfilm42-Article of Sibylle Kappes.