Annita Malavasi was just 22 when the Germans occupied Italy, their former allies, in 1943. As a partisan in the Italian resistance named “Laila”, she moved throughout the Apennines with and between fighting units, delivering information, transporting weapons, and taking part in battles. She spent over a year in the Apennines, fighting against the German occupation. At the same time, she had to assert herself against the men of the male-dominated Italian society. By the end of the war, Laila had risen among the ranks to become one of the few female commanders in the Italian resistance.

This film chronicles the story of a lifelong struggle for emancipation that began with the battle for Italy’s liberation from fascism. Laila and her two comrades, Gina “Sonia” Moncigoli and Pierina “Iva” Bonilauri talk about their time in the Resistenza and what it meant to them and many other women.

I met Annita Malavasi for the first time in 2004 on the “Sentieri Partigiani” memory walk. It was complete silence while she told her story, everyone listened to her, spellbound. Laila made such a lasting impression on me that I immediately had the idea of making a film about her.

What fascinated me so much about her was her dual struggle – externally against the German occupiers and the Italian fascists, and internally against the patriarchal structures, not just in the mountainous peasant society but within the resistance movement generally.

I also wanted this film to carry on the memory of those who fought against National Socialism. In addition I want my films to pay special attention to stories that have remained largely untold. 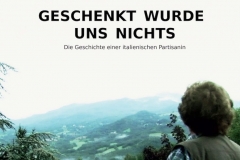 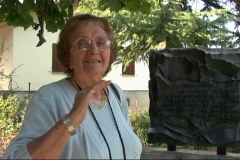 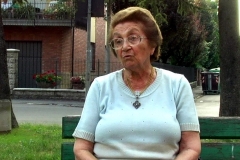 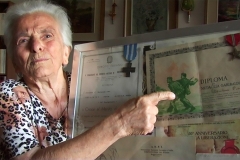 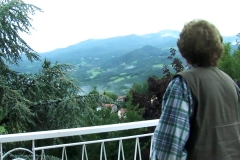 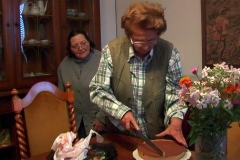 PRESS
“A film that has been bitterly lacking until now.” (Ingrid Strobl)
“emotional and unfiltered” (spielfilm.de)
“close to its protagonists” (junge Welt)
“Director, Eric Esser, has the unfortunately rare gift of being able to listen.” (Filmgazette and konkret)
“A portrait of impressive personalities.” (jungle world)
“A unique and important document of female resistance” (AVIVA-Berlin).
“The legacy of three unusual women” (Zitty)
“There is no better way to bring history up to date” (Potsdamer Neueste Nachrichten)
“Impeccable cinematic realisation of the theme” (Festival Jury FMCEX Veracruz)
“a moving and empowering documentary” (Ossietzky)
“One enjoys listening to the intelligent women’s descriptions” (Tip Berlin)
“effective and consistent in its renunciation of cinematic effects” (Telepolis)
“Nothing was given to us emphasises the fundamental importance of women in the liberation movement” (MyMovies.it)

Dietrich Kuhlbrodt in Filmgazette: “Mouth closed, ears open”, 10.07.2017
https://filmgazette.de/2017/07/10/geschenkt-wurde-uns-nichts/
“Rarely have I seen someone as present as this now almost 90-year-old who, then 23 years old, decided herself to go to the mountains around Reggio Emilia and eventually become commander of the Brigade’s intelligence service.”
“Director Eric Esser (MakeShiftMovies, AG DOK) has the (unfortunately) rare gift of being able to listen. (…) this ability to see himself as a contributor to what he has recorded – and not, I exaggerate, to dispose of it macho-like – is what distinguishes Eric Esser. A sincere, friendly documentary.”

Oliver Koch in the jungle world: “Better Films”, 30.04.2015
http://jungle-world.com/artikel/2015/18/51893.html
“Why on earth should one waste one’s time on lousy films like “Big Eyes” by the once visionary star director Tim Burton, when in the dinky cinema around the corner, such an outstanding documentary as “Geschenkt wurde uns nichts” by Eric Esser is being shown?”
“Esser has let his protagonists have their say at length; it is a portrait of striking personalities.”

Bianka Piringer on Spielfilm.de, 25.04.2015
http://www.spielfilm.de/filme/3001461/geschenkt-wurde-uns-nichts/kritik
“Esser has managed, practically at the last minute, to get a former partisan and two of her comrades in front of the camera. Annita Malavasi, who joined the Resistenza at the age of 22, Gina Moncigoli and Pierina Bonilauri died at an advanced age at the end of 2011. Their narratives, captured here, form a valuable and moving historical document for posterity.”
“Except for a few archive shots, it focuses entirely on Annita Malavasi’s narratives and the visits to the other two women. This gives the film the typical quality of oral history: it is emotional and unfiltered, linking hard facts with personal experience that goes far beyond the limitations of written history.”
“Three former partisans talk about their experiences of the Second World War. Through the main protagonist’s vivid memories and openness, an exciting document of orally transmitted history emerges – created just in time as two of the film’s protagonists have since died.

Roland Zschächner in the jungen Welt: “Never again back to the oven”, 23.04.2015
https://www.jungewelt.de/2015/04-23/040.php
“Esser’s film is close to its protagonists. He gives them space to tell their stories, to talk to each other, to complement each other. They are role models, both humorous and serious.”

Katja Herzberg in Neues Deutschland: “The Resistenza changed their lives”, 20.04.2015
https://www.neues-deutschland.de/artikel/968516.die-resistenza-veraenderte-ihr-leben.html
“There are moments in life that leave their mark on a person for years, maybe even for the whole of their subsequent existence, milestones from which you can never go back from.”

Helga Egetenmeier on AVIVA-Berlin, 13.04.2015
https://aviva-berlin.de/aviva/content_Kultur.php?id=14191378“Chronologically put into the picture, “Laila” speaks clearly and unsparingly at an advanced age about her life decisions, which are captured by the camera in calm images. She then enters into critical dialogue upon meeting “Iva” and “Sonia”, discussing her time in the mountains. Serious yet funny, the three women reflect on their daring decisions that could have cost them their lives.”
“The film lets its protagonists tell the unpolished story of a lifelong struggle for emancipation, beginning with the liberation struggle against fascism; a unique and important document of female resistance.”

Marcus Hammerschmitt on Telepolis: “Klare Ansagen”, 26.12.2014
http://www.heise.de/tp/artikel/43/43506/1.html
“You don’t get any Bandiera Rossa romanticism or militancy fetishism delivered.”
“This is effective and consequential in its avoidance of cinematic effects.”
“The fact that this film is thanks to a team from Germany can certainly in itself be seen as an act of reconciliation and international understanding, given the historical events at stake.”
“”Geschenkt wurde uns nichts” should therefore not only be shown at small festivals, but also on television, fand in a really good slot.”

Ingrid Strobl, Blog Nichts ist zu schön um wahr zu sein, 31 July 2014
https://ingridstrobl.wordpress.com/2014/07/31/geschenkt-wurde-uns-nichts-2/
“Nothing was given to us as a gift,” filmmaker Eric Esser called his documentary about Annita Malavasi, Gina Moncigoli and Pierina Bonilauri – a film that has been bitterly lacking.”
“Annita Malavasi and her former comrades-in-arms have a lot to say. They do so in a very upright, self-confident manner, with a wry humour and with pain in their eyes. These are old women whose courage and commitment to the resistance against the German occupation were never adequately appreciated, not even by their comrades.”
“He has succeeded not only in telling the story of three partisan women and thus giving an insight into the motivations and commitment of many others. He was also able to get the women to speak bluntly about their feelings and personal experiences. In this way, he gives the film a depth beyond hero worship and gives the women a belated, sorely missed tribute to their courage and historical achievement. A wonderful film to which I wish a large audience.”

Jury of the Festival Mundial de Cine Extremo de Veracruz, 25.01.2014
https://www.facebook.com/notes/685349824850864/
“The reasons given for the choice were as follows: firstly the documentary “Non ci è stato regalato niente” gives a convincing insight into the important role played by patriotic Italian partisan women in Italy during the Second World War, secondly, its impeccable cinematic realisation of that subject.”