This film was shown in summer 2020 in cooperation with docfilm42 during the LCB festival and is now in the archive.

The coordinates 37°28.6’N and 0°3.8’E mark a point in the Mediterranean – 38 nautical miles from the port city of Cartagena in Spain or 100 nautical miles from the Algerian port city of Oran – depending on the perspective of the narrative. Seen from this point in the sea, the whole world consists of water, sky and a boundless horizon. An “ocean of possibilities” charged with the hopes, fears and dreams of travellers.

It is on these coordinates on 14 September 2012 at 2.56 p.m., that the cruise ship “Adventure of the Seas” reports the sighting of a drifting inflatable boat with 13 people on board to the Spanish Maritime Rescue Service.

The radio traffic between the cruise ship, the headquarters in the port of Cartagena, the sea rescue cruiser “Salvamar Mimosa” and the helicopter “Helimer 211” structures the acoustic space of the film. On the visual level, the cinematic space contracts into a single, uncut sequence that continues through the entire running time. It is a short YouTube clip that seems to us today like the essence, the embodiment of the situation on the Mediterranean. In individual images, the rubber dinghy with 13 figures on board becomes an icon of the daily news images we are forced to look at.

From shots with tourists and officers on the cruise liner, with the crew of a container ship, with Harraga, les bruleurs – “who burn their passports” – and their families, the biographical narratives of the documentary material are extended through cinematic imagination.

A choreography emerges in which the past, present and future of the travellers are mirrored: Will a new space of possibility become visible when they meet again in cinematic space?

Philip Scheffner, born 1966 in Homburg/Saar, works as an artist and filmmaker and lives in Berlin. Together with Merle Kröger, Alex Gerbaulet and Caroline Kirberg, he runs the production platform Pong.
Their work includes: Havarie (2016), And-Ek Ghes… (2016), Revision (2012), The Day of the Sparrow (2010), The Halfmoon Files (2007).

Statement on the film project “Havarie”, directed by Philip Scheffner

Dear Ladies and Gentlemen
We – director, producer and co-producers – would like to inform you about a fundamental change of concept in the course of editing the documentary “Havarie” (AT) by Philip Scheffner. The changes should be viewed as a modification to our last letter and concept to you dated 6.1.2015. All filming has now been successfully completed as described in that letter. The video material is available and is neither technically nor artistically objectionable.

The political situation and policy regarding the situation in the Mediterranean, however, has become increasingly dire since October 2014. The director Philip Scheffner cannot ignore these developments. We note with great concern that images of people in inflatable boats who have had to put their lives in danger, as a result of European border policies, in order to secure their future and that of their families are now – one year later – part of our everyday life. We resign ourselves to the fact that these images appear on television week after week. Helplessness spreads. In the best case this leads to the feeling: “We can do nothing.” In the worst case it leads to fear, which in turn leads to refugee shelters being burned every week.
Given the circumstances, we do not want to make an observational film essay that links the portraits of five people and gives the viewer the opportunity to put the individual image in front of that of an anonymous “crowd”. Thus Philip Scheffner has decided to radically reshape the cinematic space in which the five protagonists meet.

On the visual level, the cinematic space contracts into a single, uncut sequence that extends over the entire running time of the film. It is Terry Diamond’s recording, the short Youtube clip that formed the origin of the “Havarie” project, which today seems to us like the essence, the condensation of the situation on the Mediterranean. In individual images, the rubber dinghy with 13 figures on board becomes an icon of the daily news images we are forced to look at. The film helps us to come to terms with the perspective (from above), the anonymity, the silent waving of the people on the boat. In the reflection of the water and the slowing down of the material, “ghost images” emerge: the inflatable boat seems to multiply, to elude our grasp, in the end it even disappears from view. And ultimately, the film does not spare us from panning to our own position: the huge ship, glass and steel, the tourists staring at the point in the distance. 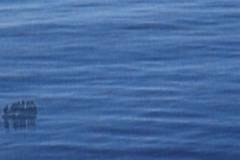 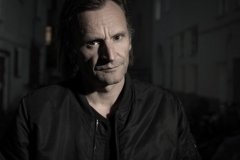 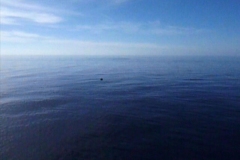 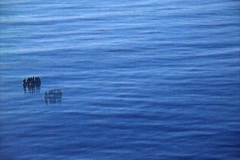