Thomas Walter has been sought by the German authorities for 25 years for being a “left-wing radical terrorist” and “a member of a terrorist organization.” In early 2017, he unexpectedly resurfaced from a life underground to apply for asylum in Venezuela.

Since resurfacing, Thomas has collaborated with Pablo Mal Élevé, a Berlin singer and musician from the band Irie Révoltés, on a transatlantic music project. For months on end, they send each other sketches of songs and lyrics, compose and write songs together to raise awareness for and motivate engagement on their political issues: a world without borders, hierarchies and exploitation. A life against right-wing radical ideas, discrimination, racism and for resistance.

The director, whose daughter is the niece of Thomas Walter, travels to Thomas in the Andes, Venezuela in March 2019 to learn about his life underground, on the run, as a criminal, and his current life in Venezuela with its precarious political situation. Shortly after arriving, Pablo Mal Élevé pays Thomas a visit to finish the album they began together remotely. Given the current situation in Venezuela, where power outages, food shortages, a lack of basic supplies and a tense political climate make the plan all the more difficult, but also unites the polar opposites in solidarity.

“Against the Tide” is about a country in upheaval, about the catastrophic situation in Venezuela, about a suspected “left-wing terrorist,” who has lived in hiding for over 25 years. About being on the run from German investigators and about a transatlantic music project dealing with left-wing dreams, both those that have burst and those that still persist. A project that highlights resistance, political engagement and the power of belief in music’s ability to catalyze societal change.

Resistance, opposition, civil courage etc. seem to me more urgent than ever in these very turbulent times. That is why it is all the more important to discuss what forms of resistance can look like, how far resistance and protest can go and what kind of resistance are legitimate and necessary and which are obsolete. These are questions that the film raises and puts up for discussion. Questions that go far beyond Thomas Walter’s personal story, contextualising within the broader narrative.

GEGEN DEN STROM – ABGETAUCHT IN VENEZUELA with its protagonists, and their biographies, offers the rare opportunity to show a discourse about emancipatory answers, visions and concepts as well as counter-positions and forms of protest, not on the basis of a theoretical academic debate, but on the concrete basis the two protagonists’ lives and experiences, Pablo Charlesmoine (MAL ÉLEVÉ) and Thomas Walter. For this reason it is important to me to use this film to add a concrete cinematic narrative to the discourse on left-wing political and social ideas, currently ongoing in Germany.

Through my personal family connection with the protagonist, Thomas Walter, the film opens up for the first time the opportunity to get rarely gained insights into the life of a “left-wing terrorist” wanted by the BKA, as well as insights into the world of the underground, illegality and decades of flight. 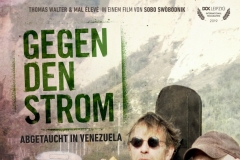 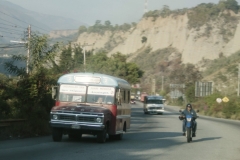 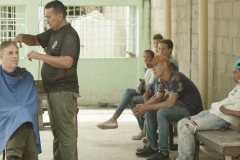 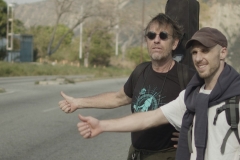 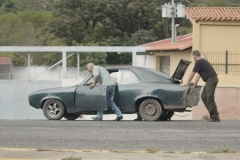 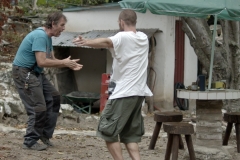 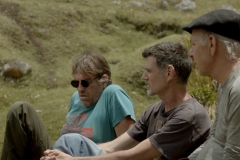 PRESS
“He is still on the BKA’s wanted list today, but the criminal wanted picture can now be revisted by investigators: after 25 years in the underground, Thomas Walter talks about his experience with being wanted and the leftist utopia.” Westdeutsche Zeitung

“Film tip!
The film provides insights into the crisis-ridden country and sheds light on Walter’s life there – from Berlin political autonomist to semi-autonomous small farmer.” CHRISMON – The Evangelical Magazine

“How does a person function in an exceptional situation? And how does an entire society react? These two questions are not at the centre of Sobo Swobodnik’s new documentary, but they are among its most intriguing aspects. … Swobodnik keeps a very low profile and only appears when a narrator is indispensable. Instead, he focuses on Walter and his world. While many documentaries like to puff up their main plot with snappy footage, Swobodnik manages to create genuine moments of reflection through a trick: again and again, he underlays slow-motion sequences of Walter’s everyday life with political songs that Walter and the German-French rapper Mal Élevé developed… What must an individual orientate themselves on in order not to become incapable of action? What did solidarity mean and where can it be found? It’s an old debate accompanying the search for the autonomous subject, the only one capable of establishing a good society.” Concrete

“Grassroots revolution in the truest sense, a moving, irritating journey back in time to a bygone world where life and action were political as a matter of course. We are writing history. Each of us is a part of it. We are not alone.” Süddeutsche Zeitung

“An unusual documentary is brought to the cinemas by Sobo Swobodnik… Using two biographies, Swobodnik shows diverse forms of resistance and provides an impressive picture of mental attitudes, persecution by the state, justice and personal ideals.” BIOGRAPH, Düsseldorf

“As I have said, this is not a critical documentary, but the document of a sympathiser. It confronts us with a sympathetic man who calls himself an anarchist and who has consistently gone or had to go his own way for his convictions.” Context Weekly

“What Gegen den Strom – Abgetaucht in Venezuela makes out of the material is a portrait of a man and a portrait of a country, while dealing with art as a form of resistance. It is an attempt to counter the voices of the powerful with one’s own, to draw attention to grievances or at least to question them. And there are at least as many of those today as there were 25 years ago.” filmreviews.com

“Thomas Walter translates his leftist ideals into music in Venezuela and the film uses the music to show the everyday life of this suffering country… And: political songs for the peace of the world… The viewer vacillates between admiration and aversion. The notion that ideals should be passed on to a new generation through self-reflective political songs is well-meant and indeed correct.” Artour Magazine, MDR

“Before the film gets bogged down in everyday observations and political non-commitments, a coincidence works to the filmmaker’s advantage. Right at the beginning of the film, guitar sounds can be heard that are distantly reminiscent of the film music of “Improved Sound Limited” from “In the Course of Time” by Wim Wenders. Walter also makes music, and in the manner of a political songwriter, he not only writes German lyrics, but also works on a joint project with the musician Mal Élevé via the internet. The political antifa activists eventually travel to spend a few days together, making music, talking and exchanging ideas.” Filmdienst

“Instead of reconstructing the events of the time, the focus is on the music, which Walter works on together with Pablo Charlemoine. The imperturbability with which the two then defy the regular power cuts by dragging a generator to a recording studio and putting on headlamps makes them very likeable.” Melodie & Rhythmus – Magazine for Counterculture

“The film tip of the week!” Free radios.net

“A film that offers a rare glimpse into a world mostly invisible due to the pressure of persecution by the justice system.” DOK-Leipzig

“Thomas Walter speaks almost tenderly about the moments of solidarity he experienced on the run. This never explicitly stated, but his words and facial expressions evoke warmth he received… The film doesn’t dwell on it. The director asks follow-up questions, which allows for a certain contextualisation. This will not reassure everyone. Yet this documentary does not fall into the trap of simply offering an uncritical podium, like other political films shown at DOK in recent years. Walter’s romanticising words are contrasted with his real life situation in all its brutality: being an asylum seeker dependent on a state system and its decisions.” Kreutzer, Leipzig City Newspaper

“One wishes that the film would help to finally bring the statute of limitations into force for the attack that was never carried out… The film is recommendable because it allows contemporary witnesses to speak, who a quarter of a century ago were part of an extra-parliamentary left whose theory and practice is little discussed today.” Friday – Weekly Magazine

“To clarify his state of mind, Thomas Walter makes music – also political music. The film shows him working together with Mal Élevé (ex-Irie Révoltés), who visits him in his Andean hut. The veiwer sees the two of them hauling a generator, jumping into the mountain river, knowing that all is far from lost.” Junge Welt

“Despite the insights into Walter’s life, the film is mainly carried by the musician Mal Élevé and music as a form of resistance. The former singer of the band Irie Révoltés visits Walter in Venezuela for joint recordings. Through his performance the film develops into a dynamic narrative about political engagement inside and outside the arts.” critic.de Film Magazine

“What can be learned? Going underground and escaping into exile are actually quite simple. The most important thing is that people like you and like your story. Then the spotlight moves on and somehow it’s all pretty cool too.” Transit -Debate Magazine

“The film shows how two different styles of music collide: “Johnny Cash for the poor and Manu Chao for the defenceless”. Everyday life in Venezuela is also shown: working in the vegetable garden; the difficulties of the power cuts; going to the refugee authorities; as well as thoughts and episodes about flight and exile and the traumatic experiences of having to part with one’s loved ones, friends, girlfriends and family. The political situation in Venezuela is touched on in passing, but it becomes clear that the initial enthusiasm for the process of the Bolivarian Revolution has given way to an increasingly critical assessment when Thomas sums up: “If, as in Chavismo for example, a leader is necessary to achieve this egalitarian society, then it is doomed to failure from the start. There can be no better society if the people don’t want it for themselves. It has to come from below, from the subjects and not be passed off as a benevolent act by anyone.” ila – The Latin America Magazine