ABOVE and BELOW is a rugged rollercoaster ride featuring survival artists in a world of challenge and beauty. Rick & Cindy in the flood control channels deep beneath the sparkling streets of Las Vegas; Dave in an abandoned bunker in the parched no man’s land; and April in the rocky Utah desert on her Martian mission. Flung into these unknown worlds, we encounter souls more akin to us than we would suspect.

A production of
maximage, Flying Moon and / and Film Academy Baden-Württemberg

in co-production with
SRF, Swiss radio and television
ZDF/3sat

Nicolas Steiner was born in Switzerland in 1984 and grew up in a small village in the Valais. During his time at secondary school, he acted in several Swiss feature films and worked as a gravedigger. He played drums in several bands and later fulfilled his military service as a percussionist in the military band. In 2005/06 he attended the European Film College in Denmark. Then studied ethnology and film studies for a year at the University of Zurich. In 2007 he began studying directing at the Baden-Württemberg Film Academy in Ludwigsburg. His most successful short film Ich bin’s Helmut was shown at over 240 festivals on all five continents. It received 42 awards and honourable mentions, including a nomination for the German Short Film Award 2010. Ich bin’s Helmut was shown together with photographic works in museums and galleries. In 2010, Steiner received a FULBRIGHT Fellowship at the San Francisco Art Institute, where he devoted himself primarily to analogue photography and board game development. In 2014, he spent time in Brooklyn, NYC as the Canton Wallis Artist in Residence. Above and Below is his directorial diploma thesis at the Filmakademie Baden-Württemberg and his debut film.

“Drubär und Drunnär” would probably be the Valaisan German equivalent of ABOVE and BELOW. And if a Valaisan uses this expression, then either the grapes have not reached their necessary Oechsle degree at harvest, or a chaotic life is on the horizon. That doesn’t have to show on the outside, but on the inside, it’s “Drubär and Drunnär.” I found this state of mind an adequate starting point for my diploma film.

In ABOVE and BELOW, I went in search of heroes in rather unfamiliar living spaces – places of refuge and shelter. It was about up and down. About light and dark. In some places the sun rules and melts everything under it. In others there is darkness, which forms a protective roof, and light is only sparse. Light can kill; shadows too. The film is a cautious attempt at both a retrospective and future-orientated look at how man exists, breathes and adapts. From space to be conquered to a demolished military bunker to being stranded in the catacombs of the man-made paradisiacal glitter and glamour hell, ABOVE and BELOW was a three-year trip that I was allowed to experience with April, David, Rick&Cindy, and Lalo, “the Godfather.” They were an irreplaceable team.

From Mars. To Earth. Beneath the surface – this concept crystallised very early in my research. In my search for possible protagonists, I came across three tropes that had already been the focus for an analogue photo series I created during a study visit to California: cowboys, ghosts and aliens. I came at the subject matter from the point of view of an outsider and stranger, although perhaps it also mirrors an American self-perception that is oriented either towards the past to the cowboys, or the future to the aliens. In between hang the ghosts – a possible metaphor for the disorientation of this great, fascinating country, with its widening social gap. From the beginning I felt both attracted and irritated. This created a fertile ground of tension for this film.

I was deeply fascinated by the lifestyles and stories of these heroes. The conversations we had in their living rooms astounded me. Their daily struggle for survival incited me to give them a voice and a face, initially, probably the only thing I could really offer. I could identify with their search and their journey. They had a drive to overcome their pasts that had brought them to their situations. I was curious about the knowledge and experience they had. This film was the right final film for me on all levels, because I could see in it a great challenge and a process of maturity.

The positive memories of the shoot kept me believing in the project, especially during the tough post-production phase. The emotions were always present. When you shoot for 2.5 months with virtually no interruptions, the outside temperatures plummeting from sweltering heat to a cold shock blizzard in a matter of days, when you’re working on a low-budget and it’s actually still Christmas at the same time, you must have very good friends and obsessive, passionate, and creative filmmaker around you in order to keep going. Standing on an abandoned gold mine with my best mates, packed like mountain sherpas and looking out over the vast California desert, we felt exhausted but thrilled, realising how privileged we had to be, to be doing this at all. That made us stronger and more united. The experiences in the pitch-black world below sharpened our senses. The feeling of never knowing what or who was coming was imprinted on our sleep. I still go into raptures when I reflect on the filming in every place with every protagonist. A lasting school of life.

Although I live and grew up in the I-Phone and Stream generation, I see the strengths of this project in terms of the-good-old-cinema-experience. I tried not to make a cautionary end-of-times documentary thriller, nor a socially critical documentary study of homeless people in the US. I didn’t want to go there. Despite all the tragedy, I hold on to the life-affirming content and goodness of humans. I used all the artistic freedom of a graduation film to let off steam and also take the risk of failing. I have tried to refine my DNA as a filmmaker.

Fortunately, at the end of the long process, joy and foresight prevailed. Arguments, tears, countless night shifts and long dry spells were part of it and are reflected in the film. I think each of us can claim that we have squeezed the last out of our experience for our vision of this film. We pushed boundaries and crossed them several times. I am grateful to all those who participated in this project, who want to show the film and pass it on. We remain adventurers and that’s what this film is about. A tête-à-tête from top to bottom with a view to the future. 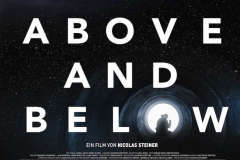 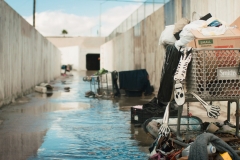 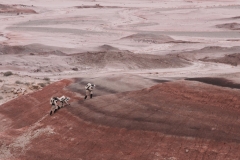 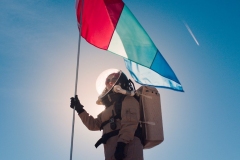 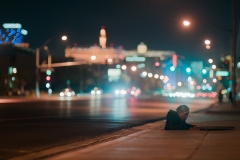 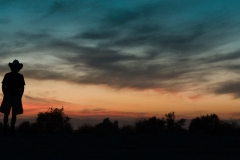 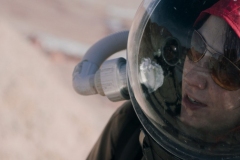 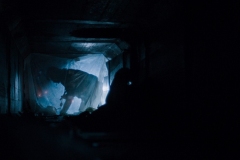 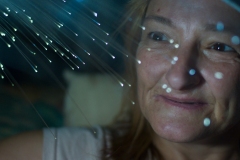 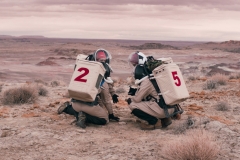