As a child, Michael Stock was sexually abused – by his own father. 25 years later he is still looking for inner peace. In conversations with his family and friends and his own reflections, he paints an ever clearer, if contradictory picture of what happened and of the consequences for each of the family members. Old family films seem to show a happy family – excerpts from Michael’s first feature film hint at his extreme adult life, overshadowed by his lifelong trauma. Yet in spite of the intense drama, the film doesn’t have an atmosphere of anger and hatred but rather a surprising air of hope and love of life. Michael’s aim is not to accuse the “perpetrator” but to understand. In the end, he takes his video “Postcard” to his father. With the camera running, he confronts him with his past…

The original idea for Postcard To Daddy was a quite different one. I actually wanted to make a film about “Mummy’s Boys”, a film that would take a closer look at various mother-son relationships. After my strokes, the ensuing period in hospital and rehabilitation, my mother took me on a “recuperation trip” to Thailand. I took my camera along, and it turned out to be not just a trip to Thailand, but also a trip into the past. I have a very close relationship with my mother, which is especially marked by the years spent trying to come to terms with the sexual abuse from my father. Feelings of shame and guilt, but also the sense of letting the family down repeatedly compelled me to engage with this past. Unlike my mother, my father has contributed nothing to the process of coming to terms with this trauma. My mother on the other hand, since the day I confided in her at the age of 19, has played a key role in working through this family drama, so it made sense that our relationship would be the focus during this trip. The more or less unplanned result was another rough cut with the working title “Mum- my’s Boy”, but in actual fact I had already begun turning it into the film that I’d been trying to make for 20 years…

At the age of 22, Rosa von Praunheim handed me a video camera and together with my friends, I conducted a kind of video workshop. This resulted in a film that provided the foundation for the script to “Prinz in Hölleland” (“Prince in Hell”). I was lucky: Berlin’s film funding body (Berliner Filmförderung) was closing down and I think nobody would promote a movie like that nowadays. Not that the movie was bad, but a script with that kind of direct narrative style that Stefan Laarmann, Wolfram Haack and I used would not no longer receive funding these days. Back then, this “unbridled enthusiasm of angry boys” was prob- ably just the kind of thing the promoters liked, although a review by the Catholic film service didn’t like that fact that the Berliner Filmförderung had made it possible for us to film a diary-style account of how we tried to prevent a friend from killing himself with heroin. Nevertheless, I can also recall that Alexander Musik wrote in TIP magazine “that Prince in Hell breaks with taboos without bragging about it, and its implacabil- ity thankfully sets it apart from the many saccharine pseudo conflict movies with their unconvincing subject material and slick realisation that you’ll otherwise get to see at German film festivals these days…”

Armed with the conviction that it’s all about relying on the right content material, I wrote a script in 1994 about my own abuse. I gave it to two journalists from the same broadcaster at the same time, unaware that this is normally not done. It happened at an event organised by the DFFB (The German Film and Television Academy Berlin). Less than two years previously, I had been turned down after taking an entrance exam for the film school. Now I had been invited along with Tom Tykwer, Christoph Schlingensief and several other film producers to talk to the students about how to make films with small budgets. As for the two journalists, they fought like cats over the script. They later told me that they had to toss a coin to decide who would secure the project. After two years of laborious rewriting, the editor-in-chief finally decided that the process of reconciliation in the script to “Aussöhnung“ (“Reconciliation”) was even more unsavoury than the rape itself, and the project died. After ZDF came ARD, ARTE, SWR, WDR, MDR, SFB, HR and BR.

The script made its way from station to station like a hot potato and I can‘t recall a single editor who didn‘t think the material was interesting. Over the years I‘ve been granted so many script writing sponsorship awards that their sum total could have made the movie. Naturally I was still plagued by terrible self-doubts, and wondered if perhaps I just didn’t have the necessary talent?

My first TV appearance was pretty strange. As surreal as it sounds, the first chance to publicly talk about the fact that boys were also vulnerable to sexual abuse and it was time to finally make a movie about the topic, came in a TV mini series about all things erotic called “Liebe Sünde“. Oddly though, despite the fact that I railed at the chief editor of this TV playlet, calling him gutless and accusing him of being a dickless wonder – shortly afterwards his former editor showed up – offering herself to my producer as script editor and saying she wanted to help me make “a big movie“. Maybe it was also because I‘d gotten to know the cartoonist Ralf König at the recording of “Liebe Sünde“. He was a studio guest as well – and he became interested in my script. We arranged to meet and the new main character of my script was born: a cartoonist who attempts to process his childhood experiences of sexual abuse through drawing comics.

That concept – with Ralf König along as major selling point – promptly landed Luna-Film another script subsidy from the Filmboard Berlin-Brandenburg and once again we headed into years of writing and waiting motivated by high hopes. But as Ralf König and I were starting to figure out that his potato-nosed figures weren‘t actually right for incest stories and Burkhard Driest – the co-author hired by myself and Luna-film – kept trying to weave murder and mayhem into the script against my wishes, work on “Aussöhnung“ or “Reconciliation“ seriously lost its focus – and not only in the script department.

In the years that followed there were other unsuccessful attempts to make “a big movie“ out of the sexual abuse story – for example with X-Filme Creative Pool or with Kordes & Kordes Filmproduktion. Maybe it was down to the legal wrangling over script copyright or recurring arguments over content with the respective production companies. Or maybe I really did lack the necessary talent. These last few years, there just hasn‘t been any room for self-doubt, or for crushingly difficult movie careers for that matter. I had finally decided to put the script to sleep as my entire focus has been on getting well and staying healthy. It wasn‘t easy, but fortunately I have an incredible family – both biological and adoptive – and a great circle of friends, many of whom work in the film industry. During the entire time I was so sick, they made it possible for me to work as much as my health would allow. I am eternally grateful to them all. They never stopped saying: “Micha, when you finally make your own movie, call us – we‘re right behind you!“ With their help and that of Oculus Film, I was able to finally make this movie in 2009/10 – as a documentary film, without the help of film subsidies or TV stations. Maybe now Postcard to Daddy – a movie that has had an incredible and difficult journey – will finally make its appearance on one of those very same TV stations…

Thanks to everyone who has helped me persevere up to this point!
Michael Stock 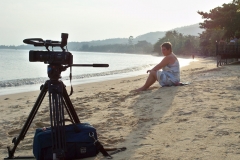 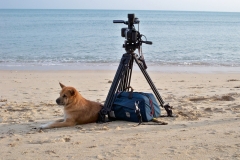 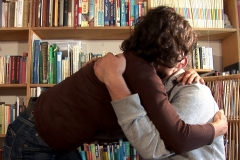 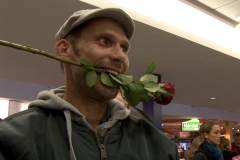 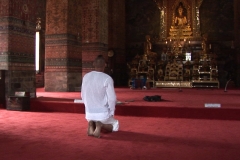 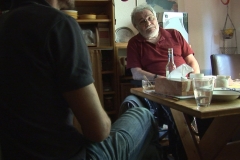 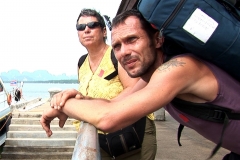 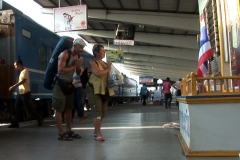 “POSTCARD TO DADDY sets a tone that you otherwise do not hear in the usual agitation around this discussion: it is a calm, almost quiet tone. It is a quality that sets this film apart from many works about this topic and that also moves beyond a one-sided stigmatisation of the abuser. That is because the son is not interested in holding a filmic tribunal over his father’s head. He does not accuse, but instead pursues the evidence of the offence that has inscribed itself onto every member of the family. One can certainly argue about whether or not this path in overcoming the traumatic past is the only right way to go, but for the son it is the only one he can take.” Jan van Helt, “critic.de”

“Stock expected to hear ‘return to sender’ but things came about differently, and you see the father in the very last scene. There is no premeditation behind this ending, and yet the film could not have been structured any better.” Kerstin Decker, “Tagesspiegel”

“Michael Stock demonstrates an incredible control of the mate- rial. He has no need of the ‘victim bonus’ one might be inclined to concede to him. POSTCARD TO DADDY is masterfully edited and structured. The film asks many questions and leaves the answering to its audience.” Frank Noack, “Siegessäule”

“This is a film that transformed from a life project to a project for survival. Viewers notice that the incredibly dense, packed 86 minutes are invested with twenty years of development. The changeovers from interviews to scenes from Stock’s everyday life just come off so perfectly balanced. (…) This film is as oppressive as it is circumspect. Anyone concerned with sexual abuse won’t be able to ignore this film.” Tilman Krause, “Die Welt”

“This is a documentary film that deals with the topic honestly, but sensitively. Stock is not in the least interested in the display of his psychic wounds. He wants closure for the sake of his own and his family’s peace of mind. (…) It is especially the mother, who failed to notice anything all those years, who Stock brings along on his healing journey. Both travel to Thailand and attempt to find closure in long and relentless conversations. (…) Stock also attempts to answer the question of what the father thinks about it twenty years later. It is almost unbelievable that he also manages to interview him. It’s been a long time since you’ve seen so much chutzpah at the movies.” Beatrice Behn, “kino-zeit.de”

The third documentary finalist, Michael Stock‘s Postcard to Daddy won the Siegessaeule readers award. The festival statement said, „Of all the films which the jury has seen this year Postcard to Daddy was by far the most moving. The members of the jury were so touched by Michael Stocks haunting documentary about his sexual abuse and the consequences for his life and that of his family that they still sat in silence in their seats minutes after the credits rolled. Through unsparing frankness that never became exhibitonist the filmmaker grants an intimate view of his suffering during and after the abuse. His cinematic self-discovery not only integrates his own story as a victim, but his entire family and even the perpetrator, and thus shows more clearly that sexual abuse is a universal issue. Stock does not mince what happened. No metaphors are used, the supposedly unspeakable is spoken out. The jury felt that Postcard to Daddy is a sad yet always hopeful film finally breaking the silence and the taboos which shows a way out of victimhood into a new life.“ Victory Column Readers Award