Watch the film on Sooner or on GuideDoc!

Since Evelin’s legs were amputated, her friends no longer show up. For years now, she has been stuck in her apartment, moving only between the kitchen, computer, TV and bed. Old video footage shows her life as a man 25 years ago: the GDR has ceased to exist, but not everyone manages to find their way in the new system.

The film offers unique insights into the world of people who are often sweepingly referred to as “Wende losers”.

Erik Lemke was born in Dresden in 1983. From 2004 to 2007 he studied documentary film directing with Dmitri Sidorov at the State University of Film and Television in St. Petersburg. He completed his master’s degree at the École Supérieure d’Audiovisuel in Toulouse, 2008. After working as an animator at Balance Film in Dresden, he has been living in Berlin as an independent editor and filmmaker since 2010.

He worked as an editor on, among others, the web documentary “Europe: The Eastern Border” (directed by Tawan Arun/Joris Rühl, winner of the German-French Journalism Award 2013). He also worked as an after-effects composer on the animated film “Alois Nebel” (Tomáš Luňák, Best Animated Film at the European Film Awards 2012), Erik Lemke works on his own documentaries.

There was not a concrete plan to make a portrait film about my great-aunt; the camera simply ran during our meetings. It was far too late that Evi and I got to know each other. I had the feeling that I had a lot of catching up to do.

There are people who come across as rather inconspicuous in everyday life, but who have an amazing effect on the screen. Evi is one of them. ‘I used to be good at rhetoric,’ she says in the film. She still is today. Those who don’t let themselves be overwhelmed by the topics Evi addresses – loneliness, physical disability, addiction problems and the feeling of being stuck in the wrong body – will experience her as a humorous, detached person.

Although any of these topics could be the focus of ‘Mich vermisst keiner!’, the key moment when I realized which film was being made was a different one: in front of the camera, Evi also reveals herself as a chronicler of her own life and pulls out a 25-year-old VHS tape. While other amateur filmmakers mainly capture the highlights in life, Evi documented everyday things. The conditions in the disintegrating Robotron factory in Radeberg and the humid and cheerful afternoons in the backyard with the neighbors offer rare insights into life in the immediate post-reunification period.

Together with her perspective from the distance of a quarter of a century, the result is a revealing long-term observation with Evi as a representative of a part of the population that had to experience the system change after the end of the GDR as a hard break. ‘Everybody cooks his own soup’. – This is how Evi sums up what she perceives as the departure of the individual from the community under capitalism. The development from collective participation in the lives of friends and colleagues to isolation from everything takes place painfully through the dissolution of existing social structures to the gradual amputation of entire limbs, and culminates in an attitude to life that – again summarized by Evi in a few words – ultimately became the title of the film. 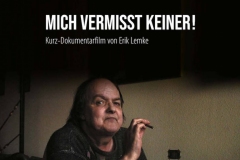 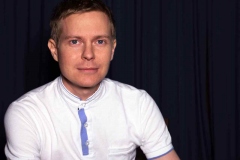 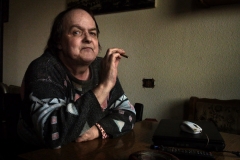 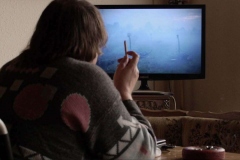 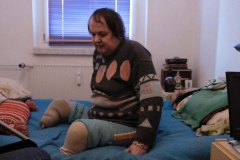 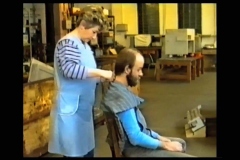 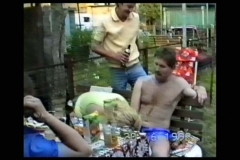 PRESS
“Evi sits alone in her apartment. She can’t go outside or use the balcony; the former information electronics technician had her legs amputated. Friends have not come to visit for a long time and her family has broken with her. Her contact with the outside world consists only of the nursing service visit every morning and the Internet. And so her life, and consequently the entire film, takes place between the television, the kitchen and the bed.

On the one hand, Evi appears lonely, cranky and bitter; on the other hand, she has retained an extraordinary sense of humor and a very endearing manner.

Producer Erik Lemke creates a special closeness to the oddball protagonist by talking directly to her without the viewer ever seeing his face. In this way, viewers feel as if they themselves were sitting on the couch with Evi, talking and watching the old VHS tapes together. The videotapes record her old life in the GDR: Evi, then still a man, playing badminton, Evi at work in the assembly plant for black-and-white televisions, Evi surrounded by her family and friends. Nothing remains of all this except painful memories.

Evi speaks in long monologues, sometimes for several minutes. She then becomes very taciturn when the filmmaker tries to talk to her about things she doesn’t want to talk about, but has to.

It’s a beautiful film, well worth seeing, and it shows in a moving way what it’s like when no one misses you anymore.”
Susanne Löffelmacher: Kreutzer

(…) The hearts of the audience and their prize, however, belonged to “Mich vermisst keiner!” (director: Erik Lemke). Full of tragedy, the film tells the story of Evelin, who, since her legs were amputated, lives a life of complete loneliness. Abandoned by friends and family, she is stuck in her apartment and only the television is able to give her an illusion of company. Flashbacks tell of her old life as a man in the GDR, before she underwent gender surgery. The film never lapses into forced sentimentality, but almost hurts with its dry sobriety. (…)
Tim Paul Büttner: luhze – Leipzig independent university newspaper