Dobropillja is located in eastern Ukraine, 70 kilometres from the contested border with the areas controlled by pro-Russian separatists.

At first glance, the conflict seems to be only a side note to the lives of the town’s inhabitants.
They go about their daily lives, as zoo directors and museum guides, musicians in heavy metal bands or in the club for lonely hearts. And yet the thunder of the near front penetrates their lives and envelopes the city like a grey veil. With its intense portrayal of everyday life in sometimes bizarre scenes, Long Echo tells of the life of the inhabitants on the periphery of a war that had almost been forgotten.

BIOGRAPHY VERONIKA GLASUNOVVA
Born 1981 in Leningrad, Russia | 1993, immigrated to Germany | 2000-2005, studied at the University of Cologne, German Studies | 2005-2010, studied at the Saint-Petersburg State University of Performing Arts, Diploma in the category “Documentary Film Directing” | 2013-2017, worked on the debut film “Long Echo”, screenplay and direction, premiere of the film at Visions du Reel, 2017 | Collaboration on numerous student films as director/actress | 2008, director of mass scenes for the feature film “Dau” by Ilya Hrzhanovski at Lenfilm in St. Petersburg | 2004-2005, assistant director at the broadcaster WDR | 2001-2004, actress in the theatre project “Solana-Theater” in Cologne |2015-2020, refugee work in Berlin, including for psychological counseling centres for victims of right-wing, racist and anti-Semitic violence.

BIOGRAPHY LUKASZ LAKOMY
Born 1791 in Krakow, Poland| 1993 immigrated to Germany | 2000, Abitur at the 2000 Albertus-Magnus-Gymnasium in Cologne | 2000-2001, training program in acting at Studiobühne Cologne | 2000-2005, studied at the University of Cologne | 2005-2010 Studied at the St. Petersburg State University of Theatre Arts (SPbGATI), specialising in documentary film direction | 2000-2002, worked at Studiobühne Köln in the areas of lighting technology, stage design and in the Studiobühne Filmclub | 2001-2003, assistant director at the Theater im Hof, Köln.

STATEMENT BY THE DIRECTOR VERONIKA GLASUNOVA
For me, and my co-writer Lukasz Lakomy, it was important to trace the background and the seeds of this war. Above all, we were interested in the Soviet legacy, the reverberations, the long echo of Soviet thinking, which it does not, it seems, easily let people out of its clutches. As Frank, the taxi driver from Tanzania, an important outside observer of the events, put it in the film, “People are used to others thinking for them. Let Moscow think for us!” This is roughly how the infantilism of the Soviet Man can be described. Deprived of their ability to act and patronised during the long period of Soviet rule, many people did not learn to take their fate, and the reorganisation of a bourgeois society, into their own hands even after the collapse of the Soviet Union. As a result, people retreated into imaginary worlds, an inner emigration. Many were desperately looking for something or someone to replace the all-powerful state, new religions, for example, or remedies of all kinds. What is the fate of the youth growing up in this mess? The generational conflict is an important part of the current discourse in Ukraine.

We were immediately fascinated by our protagonists’ attachment to and love for their hometown, Dobropillja, but also how irritated they were by it. As uprooted migrant children, we find it difficult to understand this attachment. We also asked ourselves how one survives in an atmosphere of complete powerlessness and how important imagination and faith then become. Is it a kind of survival strategy that people in crisis areas pursue unusual activities?

Filmic realisation:
Shortly before filming, the city was temporarily occupied by separatists before being retaken. We therefore travelled in a small team. There were thus many aspects of security to consider during production. Shortly before shooting, our cameraman left due to the security situation at the time, and the camerawoman Caroline Guimbal took his place. We considered it important that the camera work authentically to document and give the protagonists their space in the picture. This led to tableau-like images that, without being staged, give an impression and in a certain way also express the detachment of the people. We were inspired by the surroundings and atmosphere in Dobropillja. There is a veil of dust over it, like some mining towns have. This is reflected in the images and the colouring of the film. Regardless of the seasons it is a constant visual component, a feeling that the images convey without any artificial colouring and image processing. 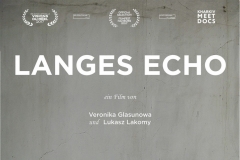 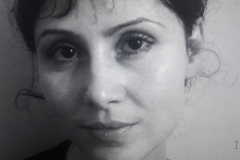 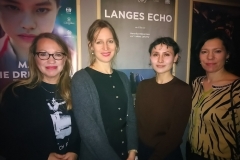 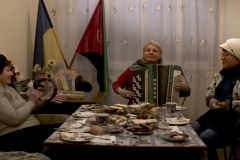 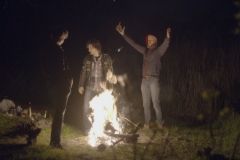 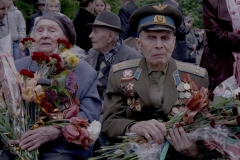 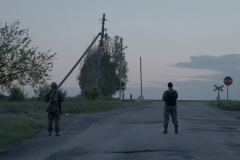 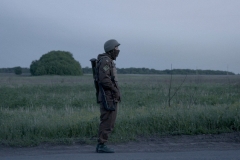 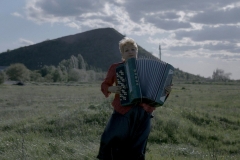 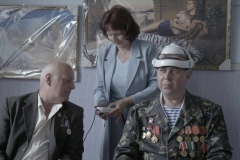 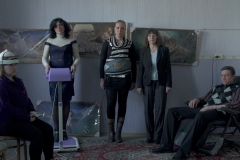 PRESS
INTERVIEW WITH VERONIKA GLASUNOVA
How did you decide to shoot a documentary film in Dobropillja?
I moved to Kiev for personal reasons, and until then I had only known Ukraine as a tourist. My co-author, Lukasz Lakomy, and I travelled almost the entire country and quickly realised that we wanted to make a film about this beautiful and torn country, about the legacy of the Soviet era. Dobropillja captured us immediately. There was a strange atmosphere there that is difficult to describe in words. In the 70s and 80s, Dobropillja was the showcase city of the Soviet coal industry, the “Pearl of Donbass”. Since the collapse of the Soviet Union, almost thirty years have passed and the city has become the “former pearl of Donbass”, a ramshackle place where the glory of bygone days can only be guessed at and the destruction caused by acts of war is visible. The acclaimed and respected mine workers who were the pride of an entire empire have become men who can barely support their families. There are hardly any prospects for the youth.

What challenges did you face while filming?
The challenges were very great. We were very afraid of rocket attacks. Their range is about 90 km, and we were only 70 km from the front line. During our first three-week shooting block in February, the outside temperature was -18 ℃ and there was no heating or water because the water pipes had been bombed. Our protagonists, whom we had met in “peacetime”, were totally changed. They were afraid, afraid of rocket attacks, afraid of tomorrow, afraid of the constantly advancing front. They were also afraid to speak. They had known us for a few years and trusted us, but this war situation, in which they did not know whose flag would be flying on the town hall tomorrow, made people extremely insecure. They did not know how much they could tell.

Has anything changed in eastern Ukraine since the film was completed?
Yes, especially in Dobropillja. People are no longer so frightened because the front lines have not shifted for some time. A kind of “normal everyday life” has returned. Water is flowing again and the heating is working. But the conflict is still going on and there is no hope for an end soon. People are still dying not far from Dobropillja. The future is still very uncertain and the mood is perhaps less depressed, but still very bad, people are traumatised by what has happened and still unable to breathe a sigh of relief.

Why is the film Long Echo relevant?
Because it teaches us about a war that had almost been forgotten and about the people who lived there. You learn how people still feel years after the Soviet collapse, how difficult it is to change from an old system to a new one. And how people deal with suddenly living in a war zone.