This film was shown in summer 2020 in cooperation with docfilm42 during the LCB festival and is now in the archive.

Le Beau Danger is a cinematic arrangement between documentary portrait and literary text. Interwoven with the moving image and divided into one hundred and seventy black and white text screens we read the work of the Romanian author Norman Manea. It is the attempt to have images and text question each other and respond to each other. Observing the surroundings of the author, which is also our present, the inner conflict of our time becomes visible, a conflict in which information becomes the counterpart of experience and therefore also of the memory itself.

René Frolke was born in East Germany in 1978. He has been working as a freelance editor, cameraman and director for several years. In 2007 he began studying art in Karlsruhe, which he dropped out of in 2012. In 2010 he made his first feature-length documentary, The Marriage of the Salamander and the Green Snake.

Norman Manea, born in Bukovina in 1936, was deported with his family in 1941. He survived the concentration camp and was a freelance writer in Bucharest from 1974 on. He has lived in New York since 1986.

This short biography, taken from the blurb of the German edition of a novel, was a starting point for this film. The terseness of these lines and their formal contrast to what they actually say, fascinated me – and so did the question of how to narrate a biography against the background of a work that is itself very autobiographical… a phenomenon I confronted again and again as a real scene while shooting the film: the public person and the representation of the writer. The oral narration of this biography, especially in an interview situation, never met the expectations I had developed from reading his novels and short stories. The pressure of public attention and the oral form seemed to force him to simplify and abridge. But what enthralled me about these scenes was the constant repetition – the ceremony of presentation before an audience, always the same interview questions and similar answers. The routine without which, it seems, one cannot survive in the literary business. Le beau danger is a cinematic arrangement of the documentary footage and literary writing of the Romanian author Norman Manea. His writing runs through the film in 170 black-and-white panels. In the course of the film, these readable images constantly interrupt the cinematic picture and challenge the viewer to seek a text behind the text.

The film is ultimately an attempt to have text and image question one another. I also regard it as an observation that makes the disruption of our time recognisable, a disruption in which information becomes the adversary of experience and thereby also of memory itself. 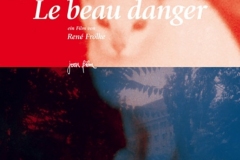 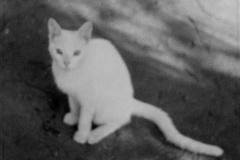 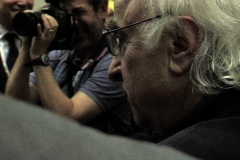 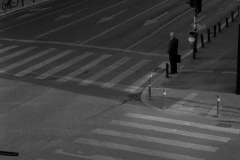 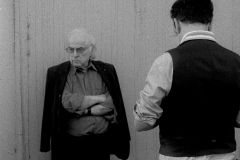 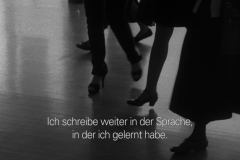 INTERVIEW
“The audience should be able to keep their own inner voice”.

What was the starting point for the film?
René Frölke: In 2011, Norman Manea celebrated his 75th birthday and was filmed. This led to the idea of making a whole film about him. In this project I was initially only a cameraman but sort of moved up. I quickly turned it into something completely different, something of my own.

Your film is not a traditional portrait film. There is no dialogue in the classical sense, no music, no commentary. The perspective is rather decentralised. You have the feeling that you learn more about Manea through reflection on the places and people around him than from him himself. Norman Manea remains a somewhat unapproachable phenomenon to the end. How did your relationship develop during the filming?
There were attempts at a personal rapprochement on my part. But at some point I realised that I could learn much more from Manea’s books than from him personally. I did not succeed in really penetrating this wall. The age difference and his unusual biography certainly also played a role. I have witnessed many interviews with him by colleagues and noticed certain patterns, repetitions. The questions were all similar, always aimed at Manea’s biography. From the beginning I found this unsatisfying. The books I had read before our encounters were stronger than all these interviews. All his works are strongly autobiographical

Towards the end of the film there is a moment when Norman Manea addresses you directly in a way that seems quite familiar. Was there perhaps an off-screen rapprochement between you that the viewer doesn’t get to see?
Altogether there were maybe two or three short moments of connection between us. But I didn’t succeed with the camera; it created an additional distance. Maybe we needed to have known each other longer to overcome that distance. Manea had also developed a certain routine in dealing with camera teams. There were already several television films about him. Volker Koepp also filmed with him in 2004 for This Year in Chernivtsi. It is difficult to make a film with someone who has already given many interviews. Manea mentions this himself in the film, he talks about the routine.

At what point did you decide to make a documentary film that rejects the usual conventions?
I never thought about it that way. Maybe I even thought I was making a normal documentary. I started from the premise that you have to put the audience of a film about an author in a position to really read his work. Because either they don’t know his work, or they read them a long time ago. That was my experimental set-up: I wanted to offer people a text to read. The decision to do this in such an extreme form was only made at the editing table. From the beginning it was clear that I wanted to use this story. It wasn’t too long and everyone could understand the setting: in a forest. There are four characters – that is a manageable constellation, but at the same time complex because of the shifts. But then I realised that I couldn’t possibly shorten this story, because then there would be nothing left of it. So I had to use the whole thing.

There are several things we don’t see in your film. For example, you don’t use spoken literary texts. Weren’t you interested in the interaction of language and image?
The voice of a speaker was already one element too many for me. If you have read a novel and later listen to the audio book, you are often disappointed by it because it didn’t match up to your own inner voice while reading, which you associate with that novel but don’t find again in the audio book. I wanted to avoid this disappointment; the audience and readers should be able to have their own inner voices. For the same reason, I did not want to provide the audience with a visualization of the texts. The experiment was to find out how the texts and the documentary footage interact with each other, whether there is any added value. I didn’t want to impose any extraneous associations on the viewer.

You shot all the black-and-white passages of the film with a 16-millimeter Bolex camera. How did this decision come about?
It’s a very special filmmaking process. You have to work very intuitively. You have to improvise a lot about when, for example, to change the film or whether to expose the last few seconds of the roll. This way of working creates a certain tension. You produce material that turns out fragmentary by itself; accordingly, you don’t have to artificially produce the fragmentary effect afterwards.