Watch the film on Kino on Demand and on Sooner!

Featuring incredible photography of spellbinding landscapes and a soundtrack by the Oscar nominated artist Volker Bertelmann aka Hauschka (Lion, 2016), the Hank Levine directed Dialogue Earth offers a moving portrait of Ulrike Arnold who paints with earth and meteorites from remote areas all around the world, and now travels through archaic, mystical landscapes in the American Southwest, especially the wilderness of southern Utah. Her encounters with old friends, farewells to others who have passed away and the spirituality that Eli Secody of the Navajo Tribe finds in her paintings, lead us to contemplate her legacy and why her upbringing has led her to undergo a lifelong journey of seeking. The day she exhibits her work at White Pocket in the Vermilion Cliffs Wilderness, Trump announces his executive order permitting the dismantlement of national monuments, to open up more federal land for exploitation. Visiting the US-Mexican border with artist friend Peter Young, she reveals her plans for her next work: the One World Painting, bringing together all of the earth she has been collecting over the past four decades from all over the globe, as a statement to preserve our unique planet and as an articulation of unity, equality, peace and harmony.

Hank was born in Bonn. His Berlin based production company Hank Levine Film & Music GmbH was founded in 1995.

I met Ulrike on a flight to Los Angeles.
That was in 1994, when Ulrike was establishing herself in Flagstaff, Arizona, and immersed in the surrounding archaic landscapes from her hogan, returning weeks later with impressive works of art.

I was impressed from the beginning by her energy and joie de vivre, her creative work, and her ability, not to be underestimated, to keep in touch with me during the 25 years that followed. Again and again I received her earth-painted postcards from one of the five continents she was traveling through.

Ulrike is a wonderfully passionate person with “her head in the stars and her feet on the ground”. Our film portrait about her life and work will carry you through intoxicatingly beautiful images, far away from civilisation, to grandiose landscapes. These are places where Ulrike works and experiences a dialogue with nature, the essence of which she transfers to the screen.

Capturing the Essence of Place is then also a leitmotif of her work.

The film shows: her working method of painting with soils from remote areas all over the world, even dust from meteorites; her encounters with old friends; her farewells to the deceased; and the spirituality in her paintings. The film leads us to reflect on her work.
We film Ulrike in Utah in the Vermilion Cliffs Wilderness on the day Trump announces his executive order to dismantle national monuments, threatening places like White Pocket and other landscapes special to Ulrike with mining and oil exploration.

During a meeting at the US-Mexico border with her artist friend Peter Young, she reveals her plans for her next work: to unite for the first time in one painting earth pigments from all the places she has visited in the last 38 years. The creation of this One World Painting is then also documented in the film.
The music for ‘Dialogue Earth’ was composed by Volker Bertelmann a.k.a Hauschka, with whom I have previously collaborated on the Exodus der weite Weg (Exodus: Where I Come From is Disappearing, 2016) documentary, among others.

“Her works, like most creative works of music or literature, are an outlet of loneliness, pain, suffering and joy. No one who knows Ulrike or her work will doubt that joy is the dominant emotion.” L. Greer Price, geologist and author.

Enjoy the film. I look forward to your comments. 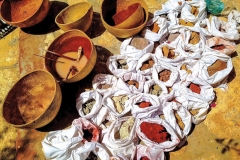 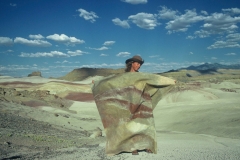 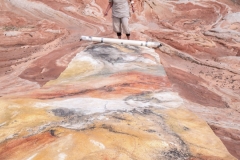 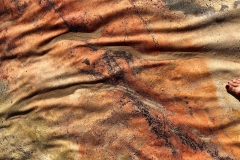 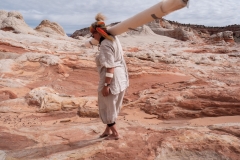 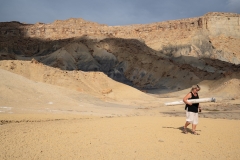 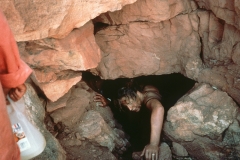 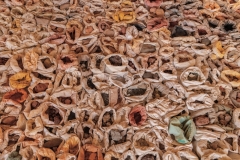 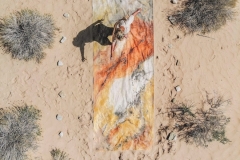 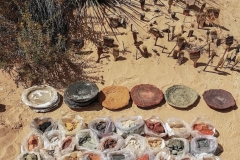 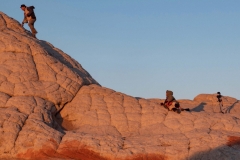 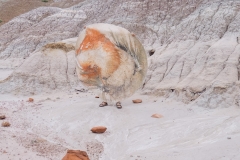 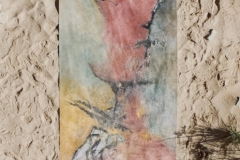 PRESS
“A fascinating and thought-provoking insight into the life and work of a unique artist.”
Dr. Martin Blaney, Screen International

“For we on speed in rush hour, take the next Exit-‘Dialogue Earth’.
An artopsy is in play ‘from dust we came and to dust we shall return’—
clear as mud, the extraordinary Terra Firma of Ulrike Arnold.”
Godfrey Reggio, director and producer of Koyaanisqatsi

“A powerful and reflective film with a moving narrative and a unique soundtrack.”
Fritz Schaap, Journalist, Der Spiegel

“(More than a documentary) Dialogue Earth is an intimate journey into Ulrike Arnold’s unique art. In today’s hyper-charged Societies, Ulrike safeguards our true self, one of humble and timeless unity with nature. Hank Levine’s prowess in storytelling and photography are exceptional.”
Roberto Perez Rocha, Founder and Director, Films for Transparency

“By way of exhilaratingly beautiful images, Hank Levine’s striking film portrait of Ulrike Arnold takes the viewer to magnificent landscapes that have been the stage for the artist’s life and work on diverse continents.
Levine’s agenda is more than to record her work; borne along by the radiant energy of Arnold’s sites, viewers can relive the artist’s dialogue with nature and her endeavour to render its essence on canvas. The film is a meditation on the beauty and majesty of Creation.”
Christine Galitzine, script writer

“A fascinating film about a fascinating woman who makes us aware of how precious our planet and its surface are, and she does this in a very subtle and profound way.
Every place on earth has its individuality and no one can portray these places better than Ulrike Arnold. She cares deeply about the planet and is a woman of conviction.”
Jean Pütz, science journalist and television host.

“Ulrike Arnold is looking for the stars above beneath her feet. In the sands of Atacama she tracks the traces of another world.”
Patricio Guzmán, director of Nostalgia de la luz

“What a wonderfully strong woman she is: her head is in the stars, and her feet are on the ground.
Her paintings are created from earth’s colors and minerals: red, blue, yellow, green and meteorite dust.
The film is a fascinating work that conveys joy, beauty and harmony.”
Wibke von Bonin, cultural historian, publicist and television editor.

„Ulrike’s work is all about power. The power of the primal elements of the natural world. The stillness of the earth–the things that were here long before us and will be here way after. Her work reminds us that everything changes and nothing is lost.”
Todd Strauss-Schulson, director of Isn’t It Romantic

“Her works, like most creative works of music or literature, are an outlet for loneliness, pain, suffering and joy. No one who knows Ulrike or her work can doubt that joy is her predominant emotion.”
L. Greer Price, geologist and author

“The vulnerability, sensitivity and fineness of the earth are palpable and jump straight to our hearts.”
Wilfried Doerstel

“At the most immediate, sensual level, the viewer encounters a form of rhythmic abstraction that celebrates the process of painting itself. There are close affinities to dance and to performance, for which the canvas serves as a portable stage.”

.. Ulrike is reacting the entire time to the color of the sky, to the movement of the clouds, to animals that are in the vicinity. This is something that helps to give the work the incredible vividness and authenticity that we find in it.“
David Galloway, professor, author, and art curator